There are all kinds of relationships on 90 Day Fiance. Some are deeper than others. There are couples whose arrangements are clearly cheaper than romantic, and there’s nothing wrong with that.

As long as both members of a couple know that money is the decisive factor in the relationship, not love, it is not necessarily a bad thing.

Unfortunately, this does not happen often. Although it may be obvious to fans that one of the two sides is used, usually the victim is unaware. Fans often fail to understand this kind of relationship. That includes David Murphey’s relationship with Lana.

The fans never thought the engagement would work. Lana doesn’t seem interested in David Murphey at all. In fact, he went to the Ukraine four times to meet her, and she stood him up every one of them. When he went there as part of 90 Day Fiance she showed up to meet David Murphey, but she was far away. Although David had given Lana an iPhone so she could contact him more often, she was unreachable during the Tell All.

Apparently she wasn’t even able to use her phone to remove her profile from online dating sites. David Murphey pays to use the website where he met Lana, and it’s not cheap. He spent thousands of dollars just for the site, and Lana’s profile is still active. She hasn’t taken it down now that she is “girlfriend”, and she still has profiles on other sites as well. David says Lana’s manicured nails make it difficult for her to use the phone properly.

Fans think the only reason David Murphey is still interested in Lana is because of the money he’s invested so far. He doesn’t want this to go to waste, so he’ll marry her even though it’s not a great relationship in the sense of the word. But it’s not just the fans who think David’s being scammed by Lana.

The other people on the show have been trying to tell him the same thing. During the Tell All, David Murphey and Ed Brown had a fight. And he came out and told David that Lana was “scamming” him. He kept defending her, and he also said that if she’s talking to other guys, it’s okay. They’re her friends, and David Murphey says Lana needs their company to help her “escape” from her life in the Ukraine.

Many of the other participants expressed concern about David’s situation, especially considering how long he has been talking to Lana. This is a wake-up call, as there were few other people who have been scammed this season.

Yolanda may have been caught by her “boyfriend” Williams. Big ed spent thousands of dollars on gifts for his girlfriend Rosemarie. Usman also laughed at Lana’s apology, and was accused of cheating his ex-girlfriend Lisa. But David Murphey still sees a future with Lana, even though she won’t answer his texts. 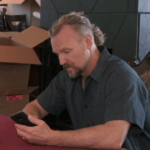