90 Day Fiancé star Sasha Larina recently made headlines after judging Emily Larina’s sister, Betsy, on her dietary choices. Betsy responded to the criticism she received through an Instagram post and many fans quickly jumped into her defense. Now, another emotional hurdle looms – Emily Larina claims that Sasha’s exes don’t see David as part of their family. And what’s more, she seems to doubt her future with Sasha.

Many fans have expressed concern that Sasha Larina could be a serial impregnator. The 90 Day Fiancé star has been married twice before Emily Larina, and has had a son with each of his ex-wives.

However, Emily claims that Sasha’s first ex-wife begged him to have a baby with her. She also wrote through her Instagram story that his exes refuse to consider her baby with Sasha, David, part of their family.

As SoapDirt pointed out, Emily Larina wrote, “The last knife in my heart was after 3 years of being with Sasha and me, she agreed to let her son meet David. She also withdrew from that and in fact told us that they are not brothers. She told us he didn’t want to meet him. I don’t know if they ever will. “The Russian custody laws are 100% in the mother’s favor.”

A fan asked, “Why don’t Sasha’s other baby mothers consider David a brother to their children?”

Emily Larina answered, in part, “I honestly don’t know. Every time we made a plan for David to spend time with his brothers, they canceled. They even said that Sasha could only see his child on the social level.”

Sounds like Sasha’s ex-wives are pretty much planning on keeping David out of their lives.

So, I was asked about my favorite Russian word 😆💖

Meanwhile, Sasha Larina’s own mother seems unsure whether or not her son will succeed in making this marriage work. While she seems to hope that he will, she does refer to his history with other women.

She told the 90 Day Fiancé producers, “I’m very worried about their future together. I mean, I know Sasha well… he’s been through two marriages. I just don’t want to think the worst.”

It wasn’t really a vote of confidence in her own son, but it’s hard to blame her when she’s seen Sasha go through two previous marriages– and two previous sons.

Sasha said of the move, “I really believe that America is a land of opportunity. When I work hard, I make my career as a personal trainer and fitness model. So I’ll buy a house, I’ll buy cars, and we’ll have a happy life together.”

While Sasha seemed excited to be in the U.S., Emily had doubts. “I don’t want a third divorce because you’re seeing someone better.” Emily Larina told Sasha at one point during training.

Sasha replied, “You’re a beautiful girl, and I love you.” Probably not the great reassurance Emily was looking for. 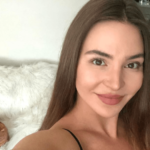