90 Day Fiancé stars David Murphey and Lana may have known each other online for seven years. Despite this, they only met recently. Not for lack of trying, since David Murphey has made several trips to Ukraine without success. He finally met Lana for the first time and is on his second date. However, David is already thinking about taking it to the next level. He wants to talk to Lana about his engagement.

Fans are surprised to see David Murphey and Lana getting along so well. This is especially true after all the disappointment he’s suffered. In the past, they met at a train station and a local restaurant, but Lana never showed up.

When they finally met, everyone was even more surprised (including David!). In the video below, David Murphey is beside himself, telling Lana how beautiful she is and hugging her. With the help of a translation application, David chats with Lana, who says “we finally meet”. Lana says he’s her “soul mate”. She likes everything about him except his leather coat. Now David and Lana go on their second date.

While they’re enjoying their romantic walk around town, David Murphey has something on his mind. He says he and Lana are going to dinner. While they’re enjoying their evening together, David wants to do something more romantic. He’s in a hurry, because he only has a few days left in the Ukraine before he goes back to Las Vegas. David wants to talk to Lana about his engagement before he goes home.

In a recent episode of 90 Day Fiancé, fans see David Murphey finally meet Lana in Ukraine. Many fans had believed that Lana was David cat fishing. That’s because every time he tries to meet her, she doesn’t show up. Also she will not video chat with him and will only talk through the dating site where they met. For that privilege, David pays by the minute.

As shared by People, a peek at Sunday’s episode shows David Murphey and Lana spending time together. They’re finally on their way to a date. In the clip, David says it’s their second date together and that he and Lana are having a great time.

The video shows 90 Day Fiance stars walking arm in arm and posting photos along the way. David says how great it is for him. He says things with Lana are “getting better and better”. However, while David and Lana have only recently met, David wants to push things. He wants to talk about taking their relationship to the next level before he goes home. 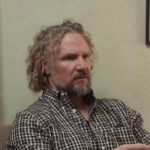