90 Day Fiancé fans were shocked by Tania Maduro when she decided to leave Syngin Colchester behind for 30 days. Usually, the franchise focuses on a couple who need to spend 90 days together to make their marriage application work.

However, Tania Maduro decided to spend 30 of her 90 days in Costa Rica while Syngin Colchester lived in a barn in her mother’s backyard. Maduro apparently attended an herbal retreat, where she also went to clubs and refused to call Colchester often enough to his liking.

Syngin Colchester often wanted Tania Maduro to call and say good night, or let him know she was safe. He found it annoying that she chose to dance in the club and at the same time refused to call him. Tania Maduro felt that Colchester was too clingy.

At the time of Maduro’s decision, Syngin Colchester said, “I am literally close to everything that belongs to you. I’m all alone in the slums of America, you know…so I’m not looking forward to staying here on my own at all. I feel a little lost and it sucks.”

Unfortunately that was not the end of the conflicts between Tania Maduro and Syngin Colchester. When Maduro returned, the two decided to have their fortunes read together by an astrologer. Maduro has shown interest in pseudoscience during her time in the show, so this shouldn’t be a surprise.

However, the real surprise for both Colchester and 90 Day Fiancé fans came when the astrologer asked Maduro about her soulmate. The astrologer claimed the two were very compatible because of their stars, and asked them if they felt they might be soulmates.

Colchester said that he did not believe in soul mates before, but that Maduro changed his mind. However, his 90 Day Fiancé partner didn’t feel the same way. Maduro said, “I don’t think I have that full soul mate feeling.” She then added that her soul mate was her first love, not Colchester.

Clearly, Colchester didn’t enjoy hearing this. He said to Maduro, “I can’t deal with this nonsense.” 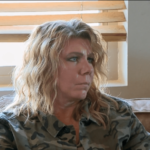