Alaskan Bush People: Bear Brown Has Been Residing İn The Container Since At Least April

Alaskan Bush People’s Bear Brown revealed on social media that he is still living in a warehouse while he continued to fight for custody of his son, River. The 31-year-old reality TV star posted a photo from inside the steel box with a glued window.

Alaskan Bush People: Bear Brown Has Been Residing İn The Container Since At Least April

In the snapshot, the red curtains are open with a view of the full moon illuminating his current home. You can see the top of a guitar leaning against the tin wall, which also had a full-length mirror.

A small lamp illuminates the tiny space where Bear Brown has lived since at least April.

The Alaskan Bush People star showed his new home on Instagram for the first time after living in the wilderness of Washington State during the last season of his family’s reality show.

A video saw Bear Brown training topless, with his bed next to a stack of white boxes. Another one shows him standing on top of the box looking at the surrounding landscape.

Snow-capped mountains full of green pines surround the place of the Discover Channel star. Bear Brown brought a number of mirrors into the house while he was isolating himself during quarantine. The television character continued to fight for his newborn, River, in a bitter custody battle with his ex, Raiven Adams.

He initially denied that he was River’s father, three months old, but confirmed that he was the father after taking a DNA test and his lawyers have now sent the documents to the Alaskan courts.

Last month, Bear Brown submitted the documents in response to Raiven’s counterclaims, in which he asked for sole custody of his son after he requested joint custody. 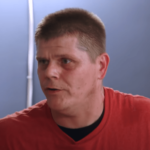