‘Days of Our Lives' Spoilers: Is This How Kristen DiMera Killed Haley Chen?

NBC ‘Days of Our Lives‘ (DOOL) spoilers tease that fans may have the answer they have been looking for regarding the mysterious death of Haley Chen (Thia Megia). Apparently, Kristen DiMera (Stacy Haiduk) wasn’t herself after she lost her baby that she might have had an out-of-body experience before she killed Haley. Read on for the latest spoilers.

Days of Our Lives‘(DOOL) spoilers time leap certainly has a lot of fans who want to know what happened to their favorite characters during the mysterious twelve months that weren’t on screen. From what we do know, Kristen DiMera lost her baby with Brady Black (Eric Martsolf). Even though she tricked him into sleeping with her while still wearing her Nicole Walker (Arianne Zucker) mask, Brady is just as upset about the loss of their baby. In fact, neither of them have been able to pass on this experience.

‘Days of Our Lives’: Is This How Kristen DiMera Killed Haley Chen?

Having said that, Haley Chen died during the same time frame. Although we know that JJ Deveraux (Casey Moss) tried to take revenge on Kristen for Haley’s death, we don’t know what caused her death. Kristen is believed to have pushed Haley down a flight of stairs. But for what reason?

Days of Our Lives’ (DOOL) spoilers say Kristen may have been in a zombie state before she pushed Haley down the stairs and killed her. Since this was such an extrasensory and physical experience, did Kristen accidentally kill Haley? Was it unintentional? Needless to say, the fans will find out soon enough! 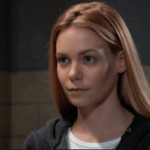