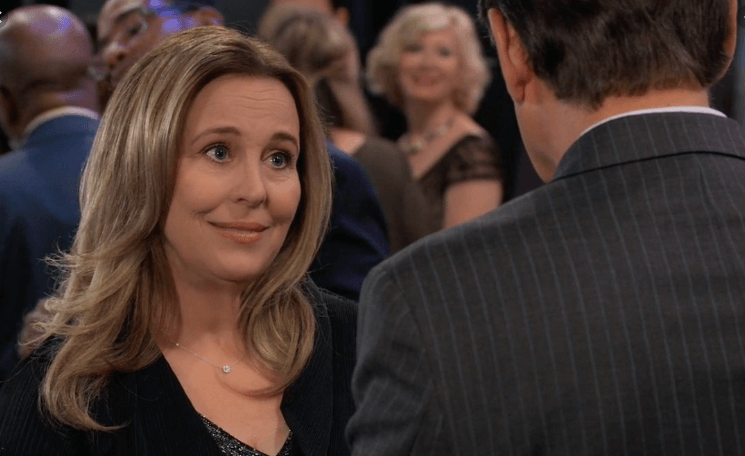 General Hospital (GH) spoilers summarized for Wednesday, January 29th reveal that Sonny Corinthos (Maurice Benard), Jason Morgan (Steve Burton) and Mike Corbin (Max Gail) stopped at a bar in Brooklyn on their way to take Mike to the clinical trial. Mike immediately grew fond of the bartender and sat down with her, talking cheerfully.

Sonny and Jason chatted at length about various topics, including how Mike would react to the clinical trial. Jason told Sonny that he was doing a lot for Mike and that, whether Mike knew it or not, he was a great son.

After a couple hours at the bar, they decided to go their own way, but Jason noticed that a man at the bar was hiding a gun and yelled at everyone to come down. Jason shot the guy with the gun, while Sonny, Mike and everybody else went down to take cover.

Meanwhile, Michael Corinthos (Chad Duell) spoke to Josslyn Jacks (Eden McCoy) at the docks. He had written to Josslyn to meet him because he wanted to explain in person that he had invited Nelle Benson Archer (Chloe Lanier) to move into Q’s mansion.

Josslyn protested strongly, but Michael insisted that he would protect Wiley Cooper-Jones (Theo and Erik Olson) from Nelle Benson.

Josslyn wondered why Willow Tait (Katelyn MacMullen) could not simply revoke the adoption, but Michael said the adoption was final and that by law it could not be revoked.

Josslyn insisted, noting that Michael was Wiley’s godfather at the request of Lucas Jones (Ryan Carnes), so Michael should think about what Lucas would want, given everything that happened.

Later, Carly Corinthos (Laura Wright) trained with Nelle Benson
at Metro Court. Carly noticed that Nelle Benson would definitely end up back in prison, and Nelle replied that she could blow up Carly’s world. Carly then had enough of Nelle’s delusions and left to run errands.

Across the room, Willow turned to Sasha Gilmore (Sofia Mattsson) saying that she is afraid that Lucas will never wake up again and that Brad Cooper (Parry Shen) will be left to raise Wiley. Sasha did her best to calm Willow and reassure her that everyone would take care of Wiley.

As Willow was leaving, Nelle Benson approached her and pointed out how hard it must be to see Wiley all the time and basically relive her giving up. Willow then repeated that while she is sorry Michael lost her son, she is increasingly happy that Nelle Benson is not a mother. This made Nelle nervous.

At the Crimson, Lulu Spencer (Emme Rylan) picked up Charlotte Cassadine (Scarlett Fernandez) from her visit with Nina Reeves (Cynthia Watros). Lulu noticed Sasha’s sliced photo and questioned Charlotte about it, but Charlotte lied and said it was Nina who cut the photo. Lulu seemed to accept that.

After Charlotte and Lulu left, Jasper “Jax” Jacks (Ingo Rademacher) arrived with champagne and cheese from Switzerland to share with Nina, all to help her focus on the good things in life and move forward in a positive way.

They chatted cheerfully, toasted to move on, then danced. One thing led to another, and they kissed passionately.

At the courthouse, Laura Collins (Genius Francis) arrived before the preliminary hearing of Valentin Cassadine (James Patrick Stuart). Then came Robert Scorpio (Tristan Rogers) and Martin Grey (Michael E. Knight) announced that he had filed a motion to dismiss the attempted murder charge against Valentin, which would get him out on bail.

Laura backed out and left after arguing with Valentin, and later Lulu arrived to find out that Valentin had posted bail. Lulu was furious and when Valentin reappeared, Lulu was furious because she was about to file a restraining order against him to protect Charlotte.

After Lulu’s departure, Martin and Valentin then had an interesting conversation. Valentin said that Nelle Benson was proving to be a good distraction, and that the Quartermaine and Corinthos families were terribly distracted at this time. Martin then assured Valentin that Nelle Benson didn’t know he was really working for Valentin.

Meanwhile, Nikolas Cassadine (Marcus Coloma) and Ava Jerome (Maura West) were chatting on the plane back from France, with Ava urging him not to give up Spencer Cassadine (Nicolas Bechtel).

They chatted at length about what it feels like to get away from your son, but after a while Ava started lobbying him to sign the post-nuptial agreement.

After a bit of back and forth, Nikolas said he would sign the post-nuptial agreement on one condition: she had to stay loyal to him. He said a man whose wife was cheating on him seemed weak, and she understood. They agreed to a platonic marriage, but they decided not to cheat on each other.

At the Corinthos Coffee warehouse, Carly arrived with Gladys Corbin (Bonnie Burroughs) in tow. Carly had signed documents to deliver for one of Sonny’s men, but after they arrived, a man with a gun started shooting and everyone went into hiding.

Sonny’s man hid Gladys in a back office, and Carly was almost shot, but she hid behind bags of coffee.

Finally, back at the docks. Laura met with Michael, who wanted to talk about the riverfront revitalization plan. He refused some of her plans, and when she stepped aside to take a phone call, Sasha appeared and told Michael that she had decided to move in with him.

Josslyn then reappeared to retrieve her diary, then saw a man with a gun and yelled at everyone to come down. Everyone got down while the man kept shooting. Michael covered Sasha and Laura ran to hide, but she was shot. 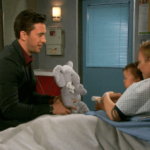