My 600-LB Life: Ashley Bernard is trying to lose weight for her children but it looks like fans are questioning where her priorities lie

In today’s episode (March 4) of ‘My 600-lb Life‘ Ashley Bernard seemed to be making her life turn around forever. She is the mother of two young girls and she knew she had to lose some weight if she wanted to be there for her children and see them grow. At the same time, Ashley Bernard wasn’t happy that her older daughter had to do a lot in the house because she was unable to move and take care of her younger daughter, who is already nine months old.

To make sure she was taking the first step towards her weight loss goal, Ashley decided to meet Dr. Younan Nowzaradan and ask him for advice. While viewers were happy that Ashley Bernard took her first step to change her life, some viewers weren’t happy with the time and effort she took to do her makeup.

Before she left home, Ashley spent time applying makeup and selecting the perfect dress for her day out. Fans were surprised and questioned her because she didn’t go to the same lengths to take care of her kids or walk around the house. Many of them assumed that Ashley Bernard was lazy and wasn’t as motivated to lose weight as she was to take care of her face.

Fans were annoyed that she didn’t have her priorities right. “If you put as much effort into losing weight as you put into makeup and nails, you might not be more than 600ls,” wrote a fake viewer.

Another added, “Layed her nails. She used Crayon Case makeup. She’s just lazy. Another echoed similar thoughts and wrote, “If you can put on eyelashes and makeup and get your nails done, you can try to take care of that baby.”

These comments have come since Ashley Bernard often said she can’t take care of her daughter because of her weight. 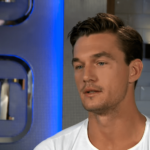