Sister Wives star Robyn Brown is the only Kody Brown wife who has mysteriously disappeared from the face of the virtual world since last season. In fact, Robyn Brown didn’t show up for their final segment on the couch even in the last episode.

The Sister Wives “Tell All” episode was never materialized for Season 14. So that last segment of three husbands on the couch seemed like an improvised replacement. But only two of his four wives showed up for it and Robyn was one of the no shows.

Meri Brown was the other wife who didn’t show up for the last episode’s couch conversation. That in itself is a clue, because Meri and Robyn Brown are not only sister wives, but also best friends. So if something was wrong with Robyn Brown at the time, who better to stay home with her than Meri Brown?

Fans know everything’s fine with Meri Brown. She’s probably the most online of all the other wives and Kody Browns put together since the end of last season. Aside from Sister Wives’ original matriarch still dangling with one leg out the Brown family’s virtual front door, everything seems to be going well with Meri Brown.

Robyn Brown said in a previous episode that she knew her son Solomon years before he was born. His little soul had been around her for years before he came into this world. The same goes for little Ariella Brown, the youngest of all Sister Wives kids. This conversation raised a few eyebrows for the Sister Wives viewers at the time.

Not only did she say that she knew the ghosts of these children were around her, but she also got to know their personalities. She knew all about them even before they were a sparkle in their father’s eye. 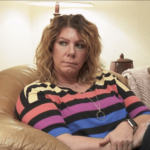