Another day, another fight on The View. On Tuesday morning, tension between Meghan McCain and Joy Behar broke out during a discussion on Hot Topics about Michael Bloomberg’s presidential campaign. When Meghan McCain pointed out that some of Bloomberg’s past comments about race may hurt her chances with progressive voters, Joy Behar ripped her head off for “knocking down Democrats” at every turn. “I’d like to know who you’re voting for,” Joy Behar said. “Who I vote for is none of your business!” Meghan McCain yelled across the table. “But I ain’t voting for Trump, and I sure as hell ain’t voting for Bloomberg!”

Considering Behar’s recent support for Bloomberg, the former mayor of New York, Tuesday’s explosion was not supposed to be a surprise (and yet!). The co-presenters opened the show with a 2011 Bloomberg film that told PBS Newshour that young black and Latino people “don’t know how to behave” in the workplace. “We had a whole show called Mad Men that dealt with stupid things, particularly – and not only, but mostly – white kids of a certain age believed and said,” said moderator Whoopi Goldberg. “So it’s no surprise to me.”

Meghan McCain agreed, adding that because of Bloomberg’s “problematic” comments, running for president will be “much more difficult than you think”. Joy Behar disagreed, saying, “If we keep shooting down Democrats, Trump’s gonna win… Be careful with that.”

“But if the Democrats don’t take him down, the Republicans will,” Meghan McCain responded, who went on to sue for another racist comment by Bloomberg. “You want to take a stand against Trump and you want to take the moral high ground, Democrats? I don’t know if this guy’s gonna be the one you can turn your character against.”

And with that, Joy Behar was off and running. He began reading a series of insensitive comments from Trump, none of which had anything to do with the current discussion. “I’m not defending Trump because I’m attacking Bloomberg,” Meghan McCain said. “Should I give Bloomberg a pass? Not on this show! Not with this host!

“I’d like to know who you’re voting for! Who are you voting for?” Joy Behar replied. “Who I vote for is none of your business!” Meghan McCain shouted. But I’m not voting for Trump, and I’m certainly not voting for Bloomberg!” He added that his co-hosts “did a terrible job convincing [her] that he was voting for a Democrat,” but before Behar could respond, Goldberg started the publicity.

If only this were the end of Meghan McCain-Behar’s pitch. After the break, the duo got busy again when Meghan McCain insisted that Bloomberg’s discussion was entirely “clean game” for the co-hosts. “We’re not trafficking in anything incendiary,” he said. “For him to come out expecting nothing to come out and for The View not to talk about it as a Hot Topic is ridiculous!

When Joy Behar said that Bloomberg “didn’t say that,” Meghan McCain made it clear that he’s getting the impression “from the media” and Behar herself that they should “give him a pass”. The lefty co-host pushed back, saying, “I have a counterpoint to your point, that’s all. She brings out the bad side, I bring out the good side. That’s it. That’s what the show’s about. It’s called The View.” Behar’s remark earned her applause from the audience, but McCain wouldn’t have it. “I know, but she seems to have a problem every time I have a different view,” she said.

Once again, Whoopi Goldberg cut them off. “And I have a completely different opinion to raise,” she said, changing (mercifully) the subject with John Bolton. Bless you, Whoopi. 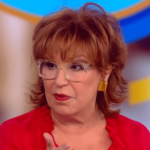