Counting On: Jessa Talks About Her “Baby Bump.

The Duggar family seems to be growing all the time, so fans often speculate which Duggar child will be the next to welcome a new addition.

More recently, Jessa Duggar has been the subject of rumors about pregnancy. In some recent photos, fans of Counting On thought they spotted a small bump.

Jessa Duggar and her husband Ben are already parents of 4-year-old Spurgeon, 3-year-old Henry and 1-year-old Ivy, but Counting On fans want to know when baby number four will arrive and if Jessa is really pregnant.

After more than a week of comments and questions about her being pregnant again, Jessa Duggar has decided to clarify things.

Counting On: Jessa Talks About Her “Baby Bump.

Jessa lived up to her reputation as clapback queen in the Duggar family when she responded to a fan who asked her when child number four would be announced.

He’s thrilled to have a shorter haircut (especially the fact that it’s out of his eyes🤣), but every time I cut his hair I end up missing those messy curls. 💙 If you’re thinking about doing a DIY cut on your boy’s hair but don’t know where to start, check out my easy toddler haircut tutorials! Click the link in my bio to watch. 💇🏼‍♂️

The revelation that there is no fourth baby on the way may have disappointed some fans, but for now, the Seewalds seem perfectly happy with their three children, .

A few weeks ago, Jessa Duggar shared a video of Ivy Jane Seewald’s first birthday. In it, Jim Bob Duggar was heard joking that the inside of the cake would reveal whether it was a boy or a girl. While it was collected by several fans and followers, those who know Jessa know that she usually prefers to keep the sex of her children hidden until birth.

The other clue was the photo of Jessa with Jana Duggar and Lauren Swanson at Joy-Anna Duggar’s baby shower. She was wearing a wide striped dress that some thought was hiding a baby bump.

Announcing a pregnancy is a big deal for the Duggars. They often do it in conjunction with a new season or a Counting On promotion. Almost as soon as a couple gets married, they are expected to start raising a family.

Although Jessa Duggar may not be pregnant right now, many people think she is likely to have other children. She and Ben Seewald have also discussed adoption, which could happen in the future. But for now, Jessa’s happy with her taco belly. 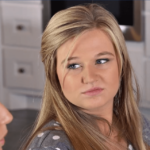