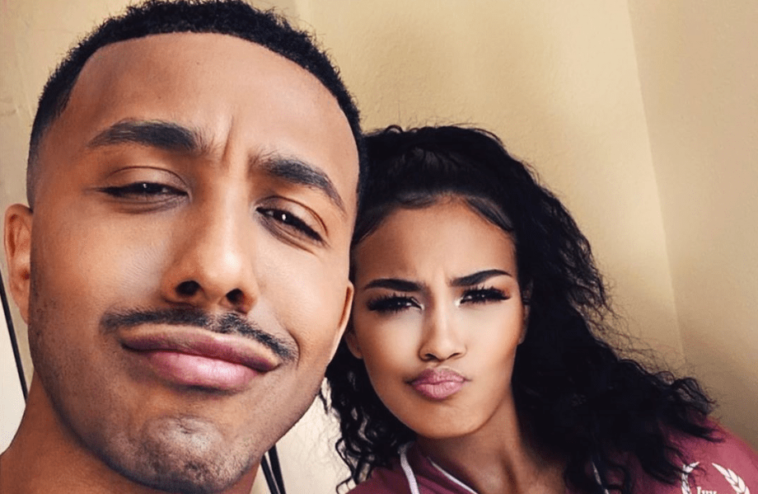 R&B singer and actor Marques Houston, 38, is facing an examination of his relationship with 19-year-old Miya Dickey after the news of the couple’s engagement was made public. Some critics have banged up the age difference and claimed that their romance began before she turned 18.

Marques Houston addressed the controversy in a series of social media posts. “With everything that’s going on in the world, my love life shouldn’t be a topic. But since it is, let me give you all the facts…” he said in a June 2020 Instagram post. Marques Houston said he met Dickey “through a mutual friend” at a Jehovah’s Witness Convention in 2018. He said they “only started dating when she was an adult” and “fell in love and got engaged in March 2019”.

“My father Michael loves her and the people I’m closest to love her as well,” Marques Houston added. “The most important thing is that we have Jehovah’s blessing.”

What is the real story behind Houston’s engagement? The story behind this romantic relationship is complex and very controversial.

Marques Houston – better known as a former member of the R&B Immature group and for his role in the classic sitcom Sister, Sister – said he decided to speak publicly about his engagement to Miya Dickey after reading a blog about their relationship. “I felt that in this situation I needed to talk because this is not music or television, this is my family, my future wife and my life,” he posted on Instagram.

With all that’s going on in the world, my love life shouldn’t be a topic. But since it is let me just give y’all the facts so you don’t have to “allegedly” believe or create rumors. After reading the Blog that was published about my fiancé and I, I felt with this situation I needed to speak because this is not music or television, this is my family, my future wife and my life. I met Miya in 2018 through a mutual friend. Never before then, did I even know she existed. The fact that she was listed on one of our films was a misprint or someone being messy. Anyone can post on IMDB. And there’s no way someone that young could even work on a film set in the position of Art Directer because that position requires years of experience. Miya is like a daughter to Chris Stokes because we are all like family. Being a Jehovah’s Witness, we all showcase true love like family. That’s it. Chris’ real daughter, Chrissy Morales became friends with Miya in 2018, where we all first met Miya at a Jehovah’s Witness convention. It was then that Chrissy and Miya became friends. Miya and I didn’t start dating until she was an adult. We fell in love and got engaged in March of 2019. My dad Michael loves her, and the people I am closest to all love her as well. Most importantly we have Jehovahs blessing 😁 There is so much more to be concerned about in the world, than creating rumors about me. No one ever gets facts anymore, they just run with “stories”, but hey, I guess it comes with the territory 🤷🏾‍♂️. So to all the rumors about me, none of it is true! And that’s the story. No twists, no turns, no scandals, just true love. There is nothing that can come to light, because there’s no darkness in my life. You wanted the truth. I don’t have anything to hide, so if you’re waiting for something else, you will be waiting for ever. Please people focus on staying safe through this pandemic. And continue fighting for what you believe in, as long as it is true justice, and the fight is with love, not hate, because we all matter to God 🙏🏾 and I put God first in all things. I love all who support me and thank you. I won’t let you down. I love y’all! Peace and Love, MH.

Marques Houston didn’t name the blog, but Page Six reported that it could refer to a story on MTO News, which reported that Twitter users claimed that “Miyana” was “on the list of missing teenagers since she was 15 – four years old. According to Page Six, these rumors were fueled by a report that a woman named “Miyana Dickey” was listed as an art director in at least one collaboration with Houston and manager Chris Stokes on IMDb, fueling speculation that if Miya Dickey is Miyana Dickey, she may have known Houston longer than he claims.

At the time of writing this article, however, the IMDb page of “Miyana Dickey” lists her only as art director for a 2018 Houston-Stokes joint, the Always & 4Ever thriller. Marques Houston claimed that the previous credit was “a misprint or a mess.