‘Sister Wives’ What Were the Other Reasons the Browns Had For Moving to Arizona?

They made a big change. Most of the last season of Sister Wives involved the Browns planning a move to Flagstaff, Arizona. Now, the family has been living there for a while, but a trailer for the new season showed that they still don’t all live together. Why did the family move in the first place?

Why Did the Sister Wives Stars Move to Arizona?

On the TLC series, Kody Brown presented the idea of a move as making financial sense. He and his wives later discovered that Flagstaff was more expensive than expected, but Kody’s idea of having them all end up in one house instead of four spread out could have cut costs – but as far as the fans can tell from the teaser, they still don’t live together.

Kody Brown, 50 years old, revealed an image of the house he wanted the whole family to live together in the new season’s car. “I want to explore it, all I ask is that you have an open mind and a prayerful spirit for it,” he explained.

In the meantime, the trailer showed that the Browns were in financial trouble as they juggled five mortgages. “I come back to Vegas every weekend to keep the houses we have on the market open,” Janelle Brown said in the teaser. “There’s no interest in the houses.” Luckily, they’ve sold, so it’s possible the family is better off financially in Flagstaff than in Vegas.

What Were the Other Reasons the Browns Had For Moving to Arizona?

When the family first shared the news of the move with People, they said, “As much as we’ve loved making our home and memories here in Las Vegas, we’re excited to start a new adventure in Flagstaff, Arizona! We are looking forward to cooler temperatures, the mountain air, beautiful views and the slower lifestyle of Flagstaff”.

A change in lifestyle was certainly a motivator for the reality TV family. Kody Brown said in the trailer, “We made a huge gamble leaving Las Vegas to move here to Flagstaff,” before fourth wife Robyn Brown added, “Vegas changed a lot over the last few years. So we started to worry a lot more about what the kids get exposed to.”

Kody Brown continued, “We needed to move out. We needed to make an adjustment. The timing was just right to get our kids out of Las Vegas and bring them to a safe place.” 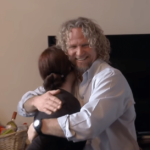