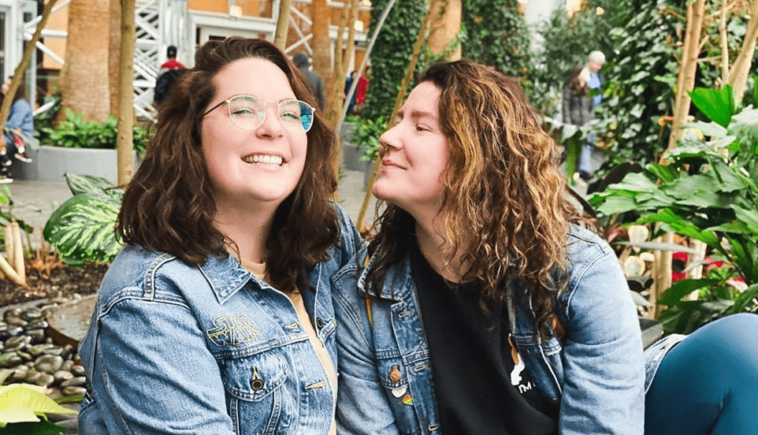 'Sister Wives': Mariah Brown spent the holidays with her fiancee

The parents of TLC’s Sister Wives, including Kody and his four wives Meri, Janelle, Christine, and Robyn , recently moved to Flagstaff, Arizona, where they celebrated the holidays together.

But one important family member was missing. Mariah Brown, first wife Meri’s only daughter, took to Instagram to share her sadness about missing the family holiday. However, she spent it with her fiancé, Audrey Kriss, who will be showing TLC’s Sister Wives on the upcoming January 2020 season.

Mariah Brown spent the holidays with her fiancee

24-year-old Mariah Brown, who now attends graduate school in Chicago and works as a yoga instructor, wrote a poignant post about missing her Sister Wives family just before Christmas. In a caption under a photo of Mariah and her fiancé Audrey, the second oldest brown daughter wrote: “I feel extra grateful for this one today. For taking care of me when I am sick & love me when I am a towel & always have the biggest smile on your face”.

The Sister Wives star added that she was having a hard time being away from her polygamist family at Christmastime. “I’ve been struggling a little bit with spending another Christmas away from my given family, but I’m so grateful that Audrey has given me another amazing family that I am so lucky and excited to spend quality time with,” she wrote in the post. “Grateful I got a great partner with great parents / family.”

feeling extra grateful for this one today. for taking care of me when i’m sick & loving me when i’m a towel & always having the biggest smile on your face. i’ve been struggling a little bit with spending another christmas away from my given family, but i’m so grateful that audrey has given me another amazing family that i am so lucky and excited to spend quality time with. grateful i got a great partner with great parents / family✨✨

Kody’s second wife Janelle Brown responded affectionately to Mariah, “Going to miss you guys so much.” Fans of the Sisters Wives responded positively to Mariah, with some praising her for being a brave member of the LGBTQ community, especially from a conservative religious background.

One Instagram user wrote, “You two look so amazingly happy. So glad you found your authentic life. Our granddaughter just came out about six months ago. We’re more than proud of her. Thank you for being such a great role model for all the young girls growing up there. Merry Christmas to you both.

Meanwhile, many of the other Sister Wives children appeared to spend the holidays with their parents in their new hometown of Flagstaff, Arizona. Mykelti Brown Padron and her husband, Tony Padron, travelled from Utah to be with Mykelti’s family. The third wife Christine Brown also shared photos of several of Brown’s other children, such as Ysabel, Gwen, Garrison and Truely, who have fun together in their Arizona rental properties during the holiday season.

First wife Meri, who recently turned out to be estranged from Kody and a large part of the family, took pictures of herself to spend time with the fourth woman Robyn Brown’s younger children doing fun Christmas activities. She also remembered holidays with Mariah and the oldest brown children.

In Touch Weekly reports that Meri Brown shared a series of throwback photos in her Instagram stories, declaring “Mariah’s first Christmas!” next to a cute baby photo of Mariah near the family Christmas tree in Utah. Kody Brown’s first wife also shared some love for the other oldest brown children, subtitles of pictures of Kody’s children with Christine and Janelle, “the first six” and “and then there were 8”.

grateful. grateful for you today & everyday

Mariah’s engagement to Audrey, whom she met when they were both undergraduates at Westminster College, is going strong. After Mariah ended up with her supportive parents at Sister Wives, the couple began dating and got engaged in January 2019 at the Women’s March in Washington, D.C. Their engagement will be marked by the upcoming season of Sister Wives, which premieres on January 5, 2020.

Meri and Kody’s only daughter also recently opened up about the stress of grad school. She is halfway through her master’s degree in social work and social justice at Loyola University in Chicago.

In an Instagram post on Dec. 11, Mariah Brown admitted she needed some deep rest over the holiday season. “This semester was a difficult one,” the Sister Wives star wrote. “I had the opportunity to study some things that mean a lot to me, that I will certainly pursue in my future, but that have taken away a lot of me to process… Now I’m ready to spend the rest of the month enjoying time with family and taking care of myself. Cheers to being halfway through school!”