Meghan Markle and Prince Harry spent six blissful weeks away from the UK and their royal duties in the holiday season of 2019 and the New Year. Although the fans had speculated on the whereabouts of the royal couple for weeks, it wasn’t until just after the Christmas holidays when the world learned that the Sussexes had been on holiday on Vancouver Island in Canada.

The couple had a relaxing vacation with the baby son, Archie Harrison. In the free time, the couple went hiking, running, shopping and spent quality time with their friends and loved ones.

Since Markle and Prince Harry are one of the most recognized couples on the planet, we wondered how they got away with being incognito for so long.

The prince and the duchess decided to go to Vancouver Island to evade the media and press – and to plan their departure as senior members of the royal family. Because the paparazzi and the press are not as present on the island as they are in the United Kingdom and the United States, the couple were able to spend time outdoors on hiking, jogging and trekking.

“Horth Hill has now become a very popular place. And they’re jogging around, so they’ve been seen,” the Deep Cove Chalet Bev Coffee said. “It’s a little exciting. I hope they’re all right. They’re breaking with tradition and I wish them well.”

Although the couple had spoken openly about the hardships they had experienced as senior members of the royal family, this time it clearly pushed the Sussexes to resign and become financially independent. In a shocking announcement on 8 January, just three days after returning from their holidays, the couple broke the internet. They said in part,

After many months of reflection and internal discussions, we have chosen to make a transition this year and start a progressive new role within this institution. As senior members of the Royal Family, we intend to take a step back and work towards financial independence, while continuing to fully support Her Majesty the Queen.

With the help of Canadian musician David Foster, who is married to Markle’s girlfriend Katherine McPhee, the Sussexes were able to rent a $14.1 million mansion on Vancouver Island that was equipped with all the security the couple needed.

A Vancouver Island resident revealed to Hollywood Life, “[The Sussexes] = were seen in all local places in the city. It’s a very small community [only 45 minutes from the city of Victoria] so they were in town for more than a week before the news got out. The weather was beautiful, so they were walking Meghan’s dogs in the park almost every day.

Although the baby Archie was not spotted with his parents, Markle was mocking her mother, Doria Ragland, for some light shopping. “Harry and Meghan were basically enjoying themselves like the locals,” the insider explained to Hollywood Life. “People gave them privacy. Nobody bothered them, but they sure made a good impression – everybody’s still talking about it.” 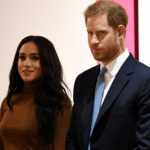