Kailyn Lowry’s father had been out of the picture as long as she could remember. But when she was pregnant with Isaac, she went to him. The meeting didn’t live up to her expectations.

Since Kailyn Lowry was a young girl, she stuck to a story her mother told her about her father, believing it showed a glimpse of his true character:

“From what I was told, I was a very sick baby, crashed with pneumonia. Instead of taking me to the doctor as planned, my mother says my father brought me from Pennsylvania to Texas to raise me alone. He did take me to the hospital when we arrived, but my mother came after him with detectives and lawyers and finally got me back,” wrote Kailyn Lowry in Pride Over Pity.

“Although my mother claimed that it was his controlling nature that led him to that plan of action, knowing that he had at least tried to raise me alone, she made me believe that my father was more than just a bum,” she continued.

How Kailyn Lowry met her dad

Do what you love, love what you do! 🖤☕️ Hair & 💄 x @hair_makeupbykarendominguez Shirt x @freeyourheartapparel 📸 x @dalielaphotography

One day the reality star logged into Facebook and saw that she had a message from someone she didn’t recognize. It was her father’s sister, Beth, and she wanted to meet Kailyn Lowry.

Lowry agreed to a trip to Texas to meet both Beth and her father, but she was nervous.

“Although I had always felt abandoned by my father because he was never there, I was now worried that I would be the one who would be a disappointment to him. If he found out I was pregnant, would he still want to know me? Why would anyone want to come into my life at such a hectic, crazy time,” she wrote about her thoughts at the time.

MTV, of course, went for the ride. But Kailyn Lowry didn’t mind.

“It was actually very reassuring to have the MTV crew with me, because it felt like they were a protective backup team, ready to beat my dad away if things went wrong,” she wrote.

When Lowry met her father at the airport, he wasn’t looking at how she’d imagined him.

“Waving through the crowd at the airport, I had an image in my head of a strong, tall man who seemed nervous and uncomfortable, yet confident and strong. Instead, the man who greeted me had a mullet, who was missing teeth, and who was at least one foot shorter than I thought he would be,” she wrote.

When Lowry and her father were talking, she noticed some contradictions in what he had told her before the meeting and what the reality was.

“Presumably he had two grades of assistant, but I don’t know if he had a job. He used to be a Marine and a bullfighter, but he was absolutely out of shape without a trace of his former military self. It seemed to me he’d let himself go to the point of no return,” she wrote.

Lowry went on to say, “He had told me he lived in a cozy two-bedroom house, but the house he brought me turned out to be a small hut.”

The first morning Lowry and her father spent together, her father asked her to borrow some money for breakfast.

“The next morning’s Dunkin Donuts run was supposed to be a decent cheap breakfast he could treat me to, but when my dad asked me to borrow some twenty, I realized I was buying it. The money from me, his pregnant teenage daughter, was the last straw in the haystack for me,” she wrote.

But what really hurt Kailyn Lowry was her father’s comments about her pregnancy.

“He was determined that if he’d been around, I wouldn’t be pregnant. I understood his sense of my circumstances, but I felt he had no right to judge. Raymond [Lowry’s father] hadn’t been there before my childhood. He wasn’t there for me when I screwed up my teens,” she wrote. 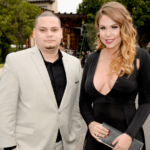