90 Day Fiancé: Darcey Silva Said Tom’s Friend And Mother Reached Out To Her

Fans of 90 Day Fiancé saw Tom Brooks and Darcey Silva have a rather violent breakup. But while they certainly dealt with the issues that arose during their relationship during the “Tell-All”, all in all, they were quite civil to each other during their online meeting.

Darcey Silva said she wishes Tom Brooks the best, but she can’t wait to focus only on her, and Tom apologized for the way he treated Darcey.

The day after the “Tell-All” aired, Tom Brooks did an interview with the Domenick Nati Show, apparently in an attempt to clarify a few things.

90 Day Fiancé: Darcey Silva Said Tom’s Friend And Mother Reached Out To Her

During the show, Darcey Silva said that Tom’s friend and mother got in touch with her to try to get her to talk to him again.

“I broke up with Tom. But a few days ago, I got a message. And I didn’t recognize the number, but the boy identified himself as a good friend of Tom’s from the UK. He basically said, “I’m a friend of Tom’s.” We’ve known each other for over 20 years in Nottingham,” she said.

“From my conversations with Tom, he told me he’d made a mistake and wanted to see if I could get past the conversation between you two. I know he’d like that very much. Please let me know what you think,” said the message read.

Darcey Silva said she didn’t reply to the message, but “a few hours later” she “received a similar message from his mother”.

“I didn’t reply. I don’t want to answer it. You can send all messages through other people if you want, but no one will get an answer. I’m done. I’m serious, and I mean it,” she concluded.

In his interview with Nati, Tom said he didn’t ask anyone to contact Darcey, but he thinks his friend did.

“I didn’t ask anyone to send anything to Darcey. And I actually sent her a message myself. I remember I went to Canada, came back and found myself at my friend’s house. And I told him how angry I was about the whole situation and how stupid I’d been and how I’d screwed up not the relationship but the friendship that we had. I think he got in touch with her,” he said.

His mother, however, “certainly didn’t contact Darcey,” according to Tom. Another thing that came up in the interview was the letter that Tom wrote to Darcey. He said he wrote a letter because he thought Darcey was more likely to read it than a text.

“If you send a text message, simply delete it. But at least if you have something in your hands you’re more likely to open it and read it,” he said.

Also, he said the letter was his idea, not the casting. “Actually, it was my idea. People say, “Oh, it was the casting.” They didn’t ask me to do it. I said it was what I wanted to do,” he said. As for the fact that if we ever learn what Tom wrote in the letter, he says it depends “on the powers that be”. 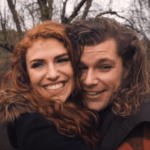