90 Day Fiancé star Rose Vega is determined to reveal what really happened between her and Ed Brown. In season 4 of the hit reality series, fans saw how Ed Brown constantly insulted Rose Vega, who eventually dumped him after he told her the truth about his plans. While fans are convinced that Big Ed is a super creep, he claims that the real reason for his questionable behavior is because “he’s not very bright.

Ed Brown and Rose Vega met via Facebook. Although he is almost twice her age (he is 54 and she is 23), he immediately fell in love with her and flew to the Philippines to meet her. Their presentation was filmed by a camera for 90 Day Fiancé, even though things didn’t go as planned.

Ed Brown told about his experience in the reality series during an interview with Stephen Kramer Glickman in The Night Time Show Podcast. He revealed that he was so taken with Rose Vega that he left town before he even got permission from work.

When it comes to their age difference, he assured listeners that “he never thought of her as a young girl” and that he was just trying to help a “single mother”. Rose Vega has a lovely son named Prince, for whom Ed showed little interest.

“I never thought of her as this young girl,” he said. “She just became a single mother I wanted to help.”

Big Ed went on to say that he told Rose Vega he was old enough to be her father. In response, she told him that “age is just a number” and that she didn’t mind that there was such a big age gap.

During his brief stint in front of the cameras at Before the 90 Days, Ed Brown’s behavior earned him the label of villain with many fans. The trouble started when he asked Rose Vega about her previous sexual encounters and urged her to take an STI test.

Then he gave Rose Vega some lingerie and bought her some dental supplies. Apparently Ed Brown felt like Rose’s breath was so bad that it was something she had to deal with on the show, a very embarrassing move for Rose Vega.

To explain this disturbing behavior, Ed Brown assured 90 Day Fiancé fans that he is “not very bright” and often has difficulty expressing himself. He wanted to make it clear that he doesn’t consider himself a creep, despite his appearance on the show. “And I’m not very bright and I don’t always say the right things,” said Ed Brown.

Considering how he acted in front of the camera, fans probably don’t buy Big Ed’s apology. Needless to say, things didn’t work out between the two of them, and Rose Vega recently shared her thoughts about what happened with Ed Brown. 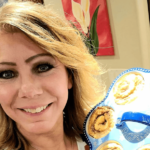