We finally got to the point of 90 Day Fiance: Before the 90 days the cast meets the others. Some of the cast members talked for months, sometimes for years without ever meeting in person, so it’s quite important.

Unfortunately, some people on the show aren’t always sincere. Being in 90 Day Fiance has many advantages and semi-fame after the fact, so it makes sense that some people can blur the boundaries between reality and fiction to get on the show.

Now, people call Erika and her girlfriend Stephanie Matto for probably lying about when they met.

Stephanie Matto is a 29-year-old social media influencer living in New York City. She and Erika started writing messages online and fell in love. In Sunday night’s episode, Fool revealed that she was going to visit Erika in Austalia, but did not tell her mother that she was bisexual.

The trip caused Matto’s family a lot of worry because he has a rare bone marrow disease that makes it very dangerous for her to travel.

In previous seasons, other cast members have been accused of meeting before their appearance on 90 Day Fiance. When fans began speculating whether Erika and Madman had done so, an Instagram account called FraudedbyTLC did some investigating to find out.

“One of Stephanie’s old posts showed Stephanie Matto on a plane with her mother (second part of the video),” the post read. “This photo suggested that 1. Her footage was taken in January 2019 and 2. Her mother went with her to the AU to meet Erika”.

“I decided to dig into this to see if it was true. What came to my mind to answer that was: Stephanie Matto flew to Los Angeles from the East Coast with her mother. Stephanie Matto spent time in Los Angeles with her mother and then went to Australia alone. She flew there to meet friends – not Erika; she documented this trip through her YouTube channel, and was actually dating someone else at the time she broke up with shortly after her trip.

The account also claimed to have heard from inside sources.

“Also, sources close to her informed me that she filmed ’90 Day’ around October 2019,” the post continued. “So she went to Australia twice in the same year, but in different parts.” 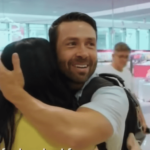