TLC ‘Sister Wives‘ Spoilers thinks we saw that Meri Brown was left behind in Las Vegas because of her company she had to attend. She told the fans that she needed the space in her old house and if she found the right house in Flagstaff, she would move. Eventually she moved to Flagstaff, but so far it hasn’t gone quite as she expected.

‘Sister Wives’: What Happened With Meri And The Wives?

When the Browns all moved to Flagstaff, Meri Brown stayed behind. She knew she had to get her own place because of the LulaRoe business she runs out of her house. She has a lot of inventory and this takes up a lot of extra space the other women didn’t have when they moved. She finally found the perfect place, but she had a lot of trouble even helping the other women to move.

Robyn Brown said: “Meri Brown lives in this house built on the side of the mountain. So, she’s got these huge stairs all the way up the side of her house and every time I go up those stairs, I faint.” The women had a meeting about how Meri Brown needed help and while the other women said the steps were too steep, Meri said that a friendly family helps each other. She does have a point.

Meri Brown told TLC cameras, “I don’t want to hire somebody. I want to have family around. I’d rather have my family come and help me put my stupid bag together than pay someone to do it, because that would mean I’d have some family interaction, which is really important to me.” She got really upset when she talked to the cameras and felt that because her ‘Sisterwives’ felt like they were alone, they could all hang out now and move her to her new place.

She mentioned that her husband, Kody Brown, was not an option because he wasn’t really there to step up and help her with the things she needs from him. After all this, the wives tell Meri that she can hire someone for the big things and that they will come and help her with the small things. They’re even having a party to unpack! We’re not sure where he’s going this season, but there’s already been some drama from the wives. 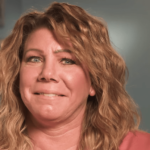