Sister Wives celebrate Robyn Brown seems to feel the weight of an explosion for his co-wife Meri Brown in the new episode on Sunday night. Better yet, fans of this TLC show will finally learn the details of those “table scraps” in a movie that has been circulating since this season began.

A scene from Sister Wives has been repeated over and over again since the start of the new season and has left fans a little confused. This scene starts with a furious Kody Brown yelling at Robyn Brown.

Kody Brown tells Robyn that he takes all the leftovers from the other wives’ table. The husband of four people doesn’t stop there. It’s obvious he’s furious at Meri Brown. Especially when he says not very nice things about the original matriarch of the Sisters Wives.

This husband of four children not only screams, but does a bizarre dance of stamps. The husband of the Sister Wives seems to keep his feet on the beat for every syllable he says. Reports indicate that Kody Brown yells at Robyn and warns her that Meri Brown will not be happy until she gets what she wants. Kody then tells Robyn that Meri Brown wants all the other wives to “bow at her feet” and “wait for her”.

But this scene goes against what Sister Wives viewers usually see on the screen. That’s because Robyn with the table scraps doesn’t match what viewers see on this show.

From where most fans sit, Robyn Brown takes the lion’s share. The fourth wife of this brood of Sister Wives lives in a larger house.

Also, reports indicate that Kody spends more time with Robyn Brown than the other wives. So Robyn Brown settling for leftovers doesn’t fit in with what Sister Wives fans see with their own eyes as the episodes unfold.

This Sister Wives husband married four women who need to be pleased with his presence. But Robyn Brown seems to be the center of attention. So hopefully this week’s episode will clear up all the confusion surrounding the Kody Brown explosion. 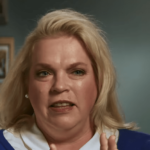