The View: Will O'Donnell return to ‘The View?’

Rosie O’Donnell had two brief experiences in The View in her television career. The comedian took on the role of moderator in 2006 when Meridith Vieira left the ABC talk show. Rosie O’Donnell returned to the day in a revamped version of the show in 2014, but only lasted 5 months as co-host. Now she’s saying that Whoopi Goldberg is the main reason she’s not on the “Hot Topics” table.

The View: Will Rosie return to ‘The View?’

Rosie O’Donnell recently revived her other daytime talk show for one night to help the Broadway community, but she won’t be returning to The View in the near future.

“I think we all agree it was better for everyone,” Rosie O’Donnell said in an interview with Howard Stern about her abrupt release in 2015. “Whoopi really didn’t like me.”

On her release five years ago, she said she left the show to be with her children. She revealed that she’d separated from her wife months earlier.

“I can confirm that Rosie O’Donnell and her wife Michelle separated in November,” said O’Donnell’s representative on Page Six. “Rosie has teenagers and a newborn at home who need her attention. This has been a very stressful situation. She’s putting her personal health and her family first. ABC has been wonderfully understanding and supportive of her personal decision to leave The View”.

Rosie O’Donnell told the SiriusXM show that before she was hired in 2014, O’Donnell visited the Goldberg home to tell her that she had been offered to return. The comic actress said Goldberg was “mean” to her on television.

“When people say, ‘Well, what happened? I say, “Go back and look at them.” It’s no mystery. Look how it turned out, and I don’t need to say anything,” O’Donnell added. 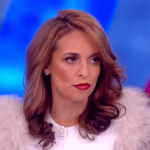