‘Sister Wives’: Christine Brown Became Jealous Of The Other Wives

Christine Brown entered her polygamous lifestyle thinking that her love and adoration for Kody would be reciprocated, but as time went on, she began to realize that Kody was far less invested in their relationship than she had hoped.

During an episode of “Sister Wives,” Christine Brown’s emotional frustration became evident as she declared on camera, “I’m tired of feeling like I don’t matter. I’m tired of not having his support when I really need it. I’m just tired. I need a partnership. I need something different than this”.

The general consensus among sister wives was that Kody Brown adored his fourth wife, Robyn Brown , more. Almost immediately after Robyn Brown was introduced into the family, Christine Brown believed that he favored Robyn so much that she felt less important to him than ever before.

Kody Brown’s closeness with Robyn Brownquickly became unbearable for Christine, and shifted the balance in the family. The March 7, 2021 episode of “Sister Wives” included the revelation that Christine Brown perceived herself as a “basement wife,” while feeling that Robyn stood out as the “queen wife”.

Christine noted that Kody Brown began to distance himself from her and their children over time, even though she did her best to keep the marriage afloat. She opened up to Kody about being overwhelmed with responsibility, only to find that he was unwilling to assist her.

Christine decided to do something about it. She was the first of the wives to take matters into her own hands, leaving her marriage to pursue her own dreams. In doing so, Christine completely freed herself from the polygamous lifestyle that no longer worked for her.

‘Sister Wives’: Christine Brown Became Jealous Of The Other Wives

Christine Brown voluntarily entered a polygamous lifestyle, knowing that she would be sharing Kody with other wives, but despite this conscious decision, she admitted to being jealous of the other wives. “I’m so sorry – I’m still jealous,” Christine said. “I’m still super, super, super jealous and I’m really, really sorry,” she said during a family reunion in the season 10 premiere (via People).

Christine Brown explained that with these strong feelings of jealousy, “It makes getting together hard — really, really hard.” She also experienced isolation, saying, “I feel like I’m on the outside looking in all the time. But it seemed that Christine wasn’t the only one struggling with the plural marriage model.

In the episode, Kody confessed his awareness of the tension that existed between his wives, and expressed guilt for being the cause of it. 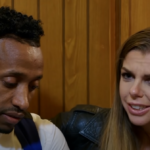