Sister Wives: Christine Brown Tells Her Daughter The Move To Flagstaff Has Been ‘so Hard’

Kody Brown and his large polygamist family moved in 2018 from Las Vegas, Nevada, to Flagstaff, Arizona. But although they had already bought a large piece of land known as Coyote Pass for the whole family, Kody Brown’s four wives were still trapped in rental properties across the city for some time after the move.

In a preview of the upcoming episode of Mar. 22 of TLC’s Sister Wives, “Robyn Brown vs. Kody”, Kody’s third wife, Christine Brown, reflects on the pressure of the move to Flagstaff. Christine Brown sits down with her now married daughter, Aspyn Brown Thompson, and wonders if the decision to uproot the children and settle in Arizona was a good one after all.

What are you doing today? Dig out all the face masks you’ve purchased for at home facials!! #bonding #momlife #coronastayingathome #celebrate #takingtimeformoments

In TLC’s sneak peek of the upcoming Sister Wives episode, Christine reveals to Aspyn, “I don’t know when we’re going to move to the property.”

Christine Brown’s daughter Aspyn, who had initially warned her parents not to move out of their beloved dead-end street in Las Vegas so suddenly, gives her mother a knowing look. “It’s being pushed further and further?” she wonders. Christine Brown tells Aspyn that she has no idea when she and her ‘sister wives’ will really end up on Coyote Pass.

Then the producers of TLC ask Kody Brown and his wives what their game plan is to get the whole family to their common property. “So, when do you think you’re gonna move into the grounds?” A Sister Wives’s producer asks.

“Never,” Kody Brown’s second wife, Janelle Brown, answers immediately. “Are you kidding me?” Kody Brown shoots back while Christine gasps in bewilderment.Kody Brown’s not that pessimistic. “I think we have a two-year plan to move forward,” says the patriarch of the Sister Wives.

“Right now I have the feeling it’s never going to happen,” explains Janelle. “Like, it’s this thing we’re talking about, and I don’t know.”

Kody Brown’s first wife, Meri Brown, agrees that the move to Coyote Pass and the construction of new houses there will not happen soon. “I don’t see it happening in the near future,” Meri admits.

Sister Wives: Christine Brown Tells Her Daughter The Move To Flagstaff Has Been ‘so Hard’

As the sneak peek continues, Christine Brown admits that part of what Aspyn predicted turned out to be true. “I mean, you told us that what we had in Vegas was perfect,” she says as the tears fill her eyes.

“It’s true.” Aspyn agrees. Kody Brown’s third wife tells Sister Wives’ producers that all the promises she made to Aspyn when the family decided to move didn’t come true.

“So I told her it would be cheaper, and we’d save money if we sold our houses. That didn’t happen.” Christine Brown’s complaining. “We’re gonna get back together at Coyote Pass! That didn’t happen. It’s just so hard, this conversation sucks. It totally sucks. Aspyn’s mother keeps crying when she confesses how much pressure she’s been under since the hasty move to Flagstaff.

“It’s been so hard, I can’t even tell you how hard it’s been,” complains the ‘Sister Wives‘ star. “I want to build, I want out. I’m tired of wasting money everywhere. I just want to build and get out together and not move. I’m done. I want to stay there forever and ever.” 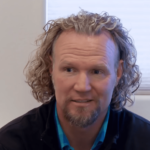